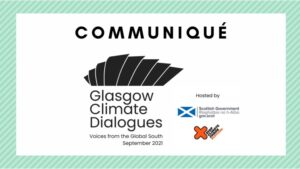 The message and recommendations were published today in an important communiqué from the Glasgow Climate Dialogues, a series of talks hosted by the Scottish Government and Stop Climate Chaos Scotland.

The communiqué is directed at the UN climate talks in Glasgow in November and covers issues including: access, participation and voice; adaptation; loss and damage, and Just Transition.

As noted in the press release on the Scottish Government website:

“The communiqué sets out a series of recommendations for COP26, including that:

Rhoda’s comment is copied below. You can read the full press release here and read the communiqué and background reports and watch a short video on the SCCS website here.

Rhoda Boateng said: “The climate crisis reiterates the need for collaboration, to find sustainable and inclusive solutions for climate action.

“By providing a platform to amplify the voices of the Global South, the Glasgow Climate Dialogues speaks to the spirit of solidarity which is much needed in combating the climate crisis today.

“We hope that in the same light, COP26 would provide grounds for both developing and industrialised countries to arrive at decisions that will strengthen the much-needed adaptive capacities of developing countries from climate impacts, as well as push countries to raise climate ambitions in line with the required climate targets. Realising this would be great progress towards climate justice.”

Speaking after the launch event today, Kaila McCulloch, Co-Chair of our International Committee, said: “We warmly welcome this communiqué and urge governments to act to ensure climate justice for the global south.

“I attended the Glasgow Climate Dialogues session on adaptation & resilience. The climate crisis is already causing deep climate impacts with food crops, sources of clean water and livelihoods being destroyed.

“People are being forced from their homes and face poverty and hunger.  Individuals and communities are seeking to adapt their lives and livelihoods to this dangerous reality and build resilience to future challenges.

“However, there is a significant gap in global finance with too little financial support reaching those who need it most. Tackling this issue at COP is identified as a key priority by impacted communities.”

International Committee Co-Chair Tony Caleary said: “At our September meeting, we discussed climate justice and the ways in which the countries who have done least to contribute to climate change are suffering some of the worst impacts. This must be front and centre at COP.

“The global north countries have to do their fair share of emissions reductions and repay their climate debt. We welcome the importance placed on a Just Transition in the communiqué.

“As stated, this must include upholding and advancing workers’ rights, ensuring that workers are involved in decisions that affect them, providing social protection for workers and households, ensuring health and safety standards, recognising and addressing both productive and reproductive work, and expanding the conversation beyond organised workers and centring the experience of women.”