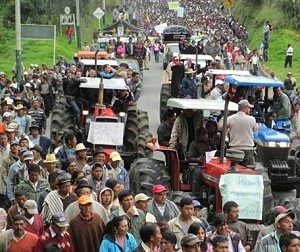 We are writing to express our support and solidarity with the Colombian peoples who have come together to express their discontent in the form of a National Strike: The Agrarian, Ethnic, Rural and Popular Minga.

Rural people, workers and local communities continue to suffer the impacts of economic policies that directly affect their livelihoods and modes of production. Such policies are a hindrance to achieving peace with social and environmental justice in the different regions of Colombia. That is why they have decided to mobilise through the country’s farmlands, roads and cities.

Peace is a right for all people. As people committed to building peace and guaranteeing the protection of human rights around the world, we welcome and support the current dialogues taking place between the Colombian government and the Fuerzas Armadas Revolucionarias de Colombia (FARC-EP), as well as the recent announcement of the public phase of negotiations with the Ejército de Liberación Nacional (ELN).

We believe that processes of this nature necessarily require widespread participation and engagement from civil society. Participation will guarantee that a clear an inclusive route for peace is outlined, one that allows for the necessary political, cultural, economic and social transformations that for too long have excluded, divided and silenced a majority of ordinary Colombians.

In this respect we are gravely concerned by the resurgence of paramilitary structures and the violence that accompanies them which has resulted in the assassination of 134 activists in the last 18 months. Paramilitary activity has proven to be a major threat to people’s fundamental rights, and we fear the important steps taken toward peace may be undone if paramilitary activity is not stemmed.

Last time there were protests of this scale; protesters were met with a repression and stigmatisation. Organisations and their leaders were persecuted leading to criminalisation, arrests and the excessive use of force and violence by state security forces such as the anti-riot police ESMAD.

In this regard we therefore call to:

Ensure that the states’ security forces and other state actors responsible for protecting the human rights of Colombians, refrain from the use of excessive force and violence against the population, as well as the criminalisation and all forms of repression and coercion of peaceful social protest;

Listen to and solve the requirements and demands of the popular sectors and peasant farmers thus creating spaces to include the demands of small farmers, both men and women;

Establish a transparent and binding process for negotiation, which responds to and meets the needs and proposals of social movements, peasants and other popular sectors.

This negotiation must be legitimatised by and include delegates that represent all mobilised sectors, in order to find a comprehensive solution to the multiple crises that are drowning the country’s population.

We will remain vigilant to the situation in Colombia and make effective our solidarity and support.