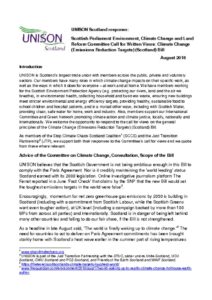 UNISON is Scotland’s largest trade union with members across the public, private and voluntary sectors. Our members have many roles in which climate change impacts on their specific work, as well as the ways in which it does for everyone – at work and at home…

As members of the Stop Climate Chaos Scotland Coalition[1] (SCCS) and the Just Transition Partnership[2] (JTP), we support both their responses to the Committee’s call for views and we quote from these where relevant.

Advice of the Committee on Climate Change, Consultation, Scope of the Bill

UNISON believes that the Scottish Government is not being ambitious enough in this Bill to comply with the Paris Agreement. Nor is it credibly maintaining the ‘world leading’ status Scotland earned with its 2009 legislation. Online investigative journalism platform The Ferret reported in a June ‘Fact Check’ that claims by the SNP that the new Bill would set the toughest emissions targets in the world were false[3].

Encouragingly,  momentum for net zero greenhouse gas emissions by 2050 is building in Scotland (including with a commitment from Scottish Labour, while the Scottish Greens want even tougher action), at UK level (including a campaign backed by more than 100 MPs from across all parties) and internationally. Scotland is in danger of being left behind many other countries and failing to do our fair share, if the Bill is not strengthened.

As a headline in late August said, ‘The world is finally waking up to climate change.’[4] The need for countries to act to deliver on Paris Agreement commitments has been brought starkly home with Scotland’s heat wave earlier in the summer part of rising temperatures worldwide. We have seen devastating wildfires, flooding and other ‘climate chaos’ around the globe and now unprecedented breaking up of the strongest Arctic sea ice. UNISON believes that these dramatic and dangerous examples of the impact of climate change very visibly strengthen the already convincing case for the new Climate Bill to have tougher targets, with strong policies required to ensure they are achieved…

UNISON asks Committee members to support the SCCS call for a target of net zero greenhouse gas emissions by 2050 at the latest and an interim target of 77% emissions reduction on 1990 levels by 2030. These have overwhelming public support, as evidenced by the responses to the Scottish Government consultation on the Bill. SCCS’s detailed response includes commentary and a range of proposals for the Bill and relevant policies. Along with SCCS, the JTP and others, we believe the Bill should be amended not just on targets and process, but to include key policy drivers that will help ensure targets are met. Among the most important amendments will be establishing a statutory Just Transition Commission in the Bill, along with a commitment to a Just Transition approach to the delivery of targets, protecting workers’ livelihoods and enhancing social justice. There should also be Just Transition reporting requirements in the Climate Change Plan.

[2] UNISON is part of the Just Transition Partnership with the STUC, sister unions Unite Scotland, UCU Scotland, CWU Scotland and PCS Scotland, and Friends of the Earth Scotland and WWF Scotland.