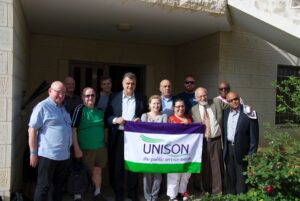 Sam Macartney was the much missed Chair, later Co-Chair, of the UNISON Scotland International Committee. We were devastated by his sudden death in early 2020.

Help us celebrate Sam’s dedication and commitment to international solidarity, with the launch of a new UNISON award and lecture. Register here www.eventbrite.co.uk/e/sam-macartney-award-for-international-solidarity-launchlecture-tickets-432899553217

Solidarity with Palestine was one of Sam’s passions. For the Sam Macartney Commemoration Lecture, come and hear in a live international link from Assaf Adiv, Executive Director of MAAN Workers Association, one of the organisations that UNISON partners with directly, and from Eurig Scandrett, Chair of the Scottish Palestine Solidarity Campaign, and from Arthur West, Chair of Scottish Friends of Palestine.

MAAN Workers Association is an independent trade union association that organises Arab and Jewish workers in Israel. MAAN stands against the occupation, for Palestinian rights and for equality and human rights for all. UNISON has had a number of successful projects with MAAN, most recently organising Palestinian workers in the illegal Israeli industrial zones in the West Bank. Palestinian unions aren’t able to represent the workers but MAAN can, although it inevitably involves legal action and strikes before they are recognised. They have also managed to secure compensation for workers who haven’t been paid the minimum wage etc. MAAN is the sole workers’ organisation in Israel that unionises Palestinians employed in the West Bank settlements as well as those working in Israel.

Music and a light buffet. Bring Your Own Bottle.

The picture above shows Sam, 2nd from left in front row, in Ramallah in 2016, meeting the Palestinian General Federation of Trade Unions as part of a UNISON delegation.