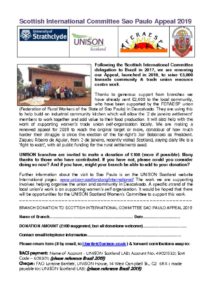 Following the Scottish International Committee delegation to Brazil in 2017, we are renewing our Appeal, launched in 2018, to raise £5,000 towards community & trade union resource centre work.

Thanks to generous support from branches we have already sent £2,600 to the local community, who have been supported by the FERAESP union (Federation of Rural Workers of the State of Sao Paulo) in Descalvado. They are using this to help build an industrial community kitchen which will allow the ‘2 de janeiro settlement’ members to work together and add value to their food production.

It will also help with the work of supporting women’s trade union self-organisation locally. We are making a renewed appeal for 2019 to reach the original target or more, conscious of how much harder their struggle is since the election of the far-right’s Jair Bolsonaro as President. Zaqueu Ribeiro de Aguiar, from 2 de janeiro, recently visited Scotland, saying daily life is a ‘fight to exist’, with all public funding for the rural settlements axed.

UNISON branches are invited to make a donation of £100 (more if possible). Many thanks to those who have contributed. If you have not, please could you consider doing so now? And if you have, might your branch be able to add to your donation?

Further information about the visit to Sao Paulo by International Committee members Kaila McCulloch (Co-Chair) and Louise Giblin is here www.unison-scotland.org/update-int-cttee-sao-paulo-appeal-report/ The work we are supporting involves helping organise the union and community in Descalvado. A specific strand of the local union’s work is on supporting women’s self organisation. It would be hoped that there will be opportunities for the UNISON Scotland Women’s Committee to support this work. Click on the document image above for the donation form / details.

Our link up with FERAESP and the community in Brazil is in conjunction with Strathclyde University’s Department of Work, Employment and Organisation. Thanks go to Brian Garvey and Francis Virginio, from Strathclyde University, who also briefed the International Committee and interpreted, when Zaqueu visited from Brazil in November. 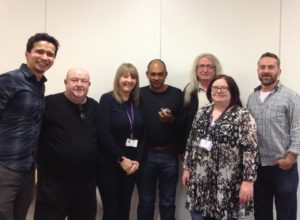