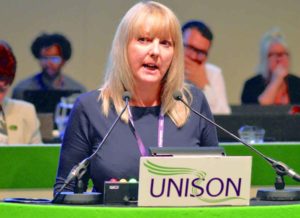 UNISON will work with others to help deliver the revival of collective bargaining across the economy.

It will also see the development of the union’s policy on sector bargaining and set out a plan to make sure it has on the ground organisation in place to back up sector level bargaining in priority public service areas of social care and childcare.

Lilian Macer, Scotland Regional Rep, supporting the motion, said “In the absence of these arrangements we work as a union to achieve recognition with non-public sector employers, and seek the best deals we can for our members, but this piecemeal approach is incredibly difficult.

“It stretches our resources. Employers are reluctant to concede much to us when they can be undercut by competitors. We need a bigger broader solution”

She highlighted the difference that sectoral arrangements on pay and conditions would make – private companies would need to abide by the sectoral agreements and they could not compete for contracts on the basis of cost-cutting and slashing our members’ wages and conditions and worries about the weakening of TUPE would fade away.

Lilian explained, “There would be sector-wide binding terms and conditions that all employers would have to adhere to, and in turn, how would the private company turn a profit? Sectoral bargaining would pull the rug out from under privatisation. It would close the gender pay gap. It would mean we could stop zero hours contracts being used.”

She said, “Sectoral bargain is a simple solution to numerous problems. It’s a big idea – and an idea that is not widely understood by the public. But it’s an idea that is gaining some traction in Scotland through the Fair Work Convention and we are making in-roads.”

Kate Ramsden, NEC, in support of the motion, pointed out “The most striking change in the way in which the economy in the UK works that we’ve seen over the last 40 years, has been the decline in the share of national income that is paid to working people in their wage packets.

“There is a strong correlation between high levels of inequality and low levels of collective bargaining, which is an essential lever to developing a fair and socially just society.

It has also meant pensions are cut, terms and conditions slashed, insecurity escalated, a huge rise in zero-hours contracts and bogus self-employment, and productivity has slumped.

Kate explained, “It happened because of legislation introduced by Thatcher’s governments in the 1980s that deliberately set out to destroy trade unions.

“And to undermine the consensus on industrial relations that had resulted in decades of rising prosperity and improving levels of equality. So, now it is the time to turn the tide.”

She urged that consideration needed to be made about what the sector bargaining proposals would mean for existing national agreements and pay review body arrangements and how it would reflect and respect differences in the devolved nations and regions.