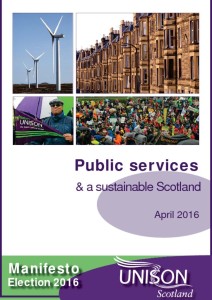 New figures from the Existing Homes Alliance show that 62% of Scottish homes are “unhealthily cold”. The public services union works with the EHA, Energy Action Scotland, Stop Climate Chaos Scotland and others in calling for a Warm Homes Act.

UNISON’s 2016 manifesto ‘Public services and a sustainable Scotland’ says that climate change is one of the biggest challenges we face, with action on energy efficiency, active travel and green workplaces crucial to helping meet climate targets.

Depute Convener Stephen Smellie said: “The lack of energy efficiency in Scotland’s housing stock is a social and environmental scandal. It adds massively to our carbon emissions and is a major cause of fuel poverty, which is at disgraceful levels.

“UNISON also wants to see a meaningful shift from car use, including through a more integrated public transport system, with green travel to work plans as part of strong green workplace action, with employers recognising trade union environment representatives.”

The manifesto calls for a ‘Just Transition’ to the low carbon economy necessary to meet Scotland’s climate targets and an expansion of public and community owned electricity generation.

UNISON says that public procurement has a major role in driving up standards, including the provision of fresh, healthy, local, sustainable food in schools and hospitals. Pubic bodies have important duties under the Climate Change (Scotland) Act 2009 and these policies will help them comply with their duties.

UNISON Scotland’s ‘Public services and a sustainable Scotland’ manifesto is available at https://unison-scotland.org/2016/04/18/public-services-and-a-sustainable-scotland-minifesto-2016/

UNISON Scotland is a key part of Stop Climate Chaos Scotland and we endorse the recommendations in the SCCS manifesto ‘Securing A Low Carbon Scotland’ https://www.stopclimatechaos.scot/news/?s=securing+a+low+carbon+scotland

Stop Climate Chaos Scotland will host an online election debate on Climate Day (Monday 18th April) with the five parties currently represented at Holyrood. www.stopclimatechaos.org/online-debate-2016. The debate will be livestreamed and will be hosted by journalist David Torrance.

UNISON Scotland and SCCS are jointly holding a fringe meeting at the STUC Congress in Dundee at 12.30pm on Monday 18 April. ‘Trade unions call for a low carbon Scotland’ www.unison-scotland.org/2016/03/16/climate-day-trade-unions-call-for-a-low-carbon-scotland-stuc2016-fringe/

New figures from the Existing Homes Alliance are here http://existinghomesalliancescotland.co.uk/wp-content/uploads/2016/04/EXHA_Cold-Homes-press-release_11April16.pdf