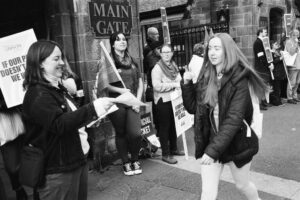 UNISON members at the University of Glasgow have voted to accept a breakthrough pay deal that will see overall pay rises of between 6% and 12.9% this pay year.

UNISON members at the university took impactful strike action for four days in September and October, gaining significant community and political support for their vibrant and well-attended pickets.

Like university workers striking at other Scottish universities, UNISON members took action to protest an imposed, disputed offer from the UK university employers that ranged from 3% to 7.2%. The supplementary offer secured at Glasgow represents a significant improvement on this national position, with the lowest paid now set to receive a permanent £2,332 annual pay rise.

“Unison members at the University refused to accept a national offer which is wholly unfit for purpose. Their industrial action on UCEA’s woeful offer, their input into local negotiations, and their demand for local change has been key in securing an offer.  Our members have made it clear that they expect tangible, long-term and sustainable solutions to significant local issues now due for negotiation on both pay and non-pay considerations. Our members deserve nothing less, and the UNISON branch at the University will accept nothing less.”

“University of Glasgow UNISON members have voted to accept this offer which delivers the lowest paid at the University some long overdue pay justice, and goes some way to help our members who are struggling in this cost of living crisis. The Higher Education sector has seen over a decade of wage stagnation and below inflation pay offers, so this local offer from the University of Glasgow is a step in the right direction for the university and wider sector and demonstrates the power of our members.

This is a victory for rank-and-file Unison members and their determination and strength in taking industrial action. Our priority now is to get the money to workers as soon as possible. UNISON members’ acceptance of a local offer doesn’t mean the University of Glasgow can rest on its laurels or continue to hide behind the university employers’ association. Our members need and expect radical change from the University in working conditions as well as pay and to deliver on the promises made to address these issues in the next phase of local negotiations. If the University of Glasgow fails to address these issues, UNISON members will hold them accountable. “

“UNISON Scotland commends our University of Glasgow members and their stellar branch officers for their courageous strike action and this breakthrough pay deal. After years of imposed pay awards from the UK university employers, and sustained periods of strike action on pay without a meaningful employer response, it is hugely significant to see a local resolution that for many workers bests the leading agreements in Scottish public services this pay year.

We also commend the solidarity and diligence of representatives and organisers from the other Glasgow campus unions, as this breakthrough was hard won and negotiated by unions working together. Workers striking and balloting at other universities can take heart from this result – collective action can get more money in to people’s pockets this winter.”