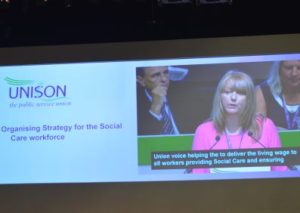 The cloud of the tragic events in London and Manchester has hung heavy over Conference this week.

The aftermath of the Grenfell Tower fire, whatever the causes, threw into focus the reality of the divide in a Tory UK between obscene wealth and inexcusable poverty.

The need to address that was reflected in policies we set on breaking the pay cap, on campaigning for decent public services, on housing policies and on a decent living wage that is actually enough to live on.

The week started with a pledge to use all our resources to tackle bullying and harassment. One of the most moving bits of any Conference is when people who are directly affected have a personal story to tell. There was much of that in this debate. The pain of the stories was matched only by the courage of the delegates telling them.

Marie Macrae continued the long tradition of the Retired Members speaking up for Young members in this debate.

Social care crisis
The crisis in social care and the risk that integration will become a front for cuts brought contributions from Jane Carolan: “This union pioneered the Ethical Care Charter, a gold standard. But we can do more to fight for universal, publicly provided care services”… and from NHS Glasgow Clyde and CVS member Una Provan: “I have no problem with change. I want to work in an integrated way. But not at the cost of producing a reduced, watered down service.”

She underlined that health and social care integration should meet the needs of communities not be an excuse for cuts like those seen in school nurse and district nurse services.

UNISON Scotland also took the message to Conference that Social care workers are an under pressure and a growing section of the public sector workforce but there are significant challenges to organising them.

There were barnstorming contributions, like Gordon McKay promising: “UNISON will smash the public sector 1% pay cap in the next twelve months. A pay cap that is driving loyal, dedicated and hard working people and their families into poverty.” He was backed up in the debate by Jane Carolan, Jim Main and Jim McFarlane.

And there were moving debates like the heart-rending testimonies in the ‘Child marriage is child labour’ debate.

Dying to Work Campaign
Also very moving was the debate where South Lanarkshire won ground-breaking support for the Dying to Work campaign. Jane Aitchison, John Nisbet, Maggie Cook and Susan Kennedy all made contributions in this debate.

Conference also pledged to continue its support for the Women Against State Pension Inequality (WASPI) following on from UNISON Scotland’s support and the STUC’s support in April.

Cuts and the big push to continue delivering services with fewer people are some of the reasons we are seeing more and more workplace stress. Conference pledged support for branch involvement through providing training, guidance and assistance. Scotland’s Kathleen Kennedy spoke on this one.

Housing
UNISON will call for a restoration of direct investment in public housing as the only way to resolve the housing crisis, with Brenda Aitchison calling for public landlords to be democratically accountable .

All these decisions were about looking outwards, to our members, to the public, to the wider world, and to the people who depend on our services.

But we were also self-indulgent enough to look inwards, not least on branch funding and after a lot of reference back and debate, we ended up with the status quo.

There were many examples of healthy and passionate debate. That’s not just good for the union, it is essential to it.

There was also humour. John Stevenson recalled a Nalgo ‘vote wisely’ campaign that unfortunately turned up a Tory candidate called Wisely. He was urging retired members to become a campaigning force for the union.

Although people giggled when retired member Rose Jackson said on the Young Members’ rule change: “I know this is very hard to believe – but I’ve already turned 27 years of age”, I for one was quite surprised.

Jeremy Corbyn
Friday saw a rapturous reception for Jeremy Corbyn. This was a relaxed, confident and inspirational Corbyn – one ready to be prime minister if we get the chance. See full report at https://www.unison.org.uk/news/article/2017/06/ndc-corbyn-speech/

He was followed by an emergency motion about the election led by Scotland’s Jane Carolan who stood down from the NEC at the end of Conference after 30 years (See tribute here, and her thanks here).

Sporting a Celtic shirt for her last conference contribution, Jane Carolan said Corbyn had “nearly proved himself an invincible”, just like her football team.

The media had predicted that his Labour Party would ship “loads of goals,” but teamwork had almost sunk “the Maybot.”

She went on to say that the Labour gains were down to the party having a “socialist manifesto. A manifesto this union played its part in. Labour for the many, not the few.”

Jeremy has long campaigned for better mental health services and Conference laid out a strategy for mental health champions at UNISON events and publicity to challenge the stigma faced by sufferers.

On the equalities front Conference reaffirmed its support for a woman’s right to choose in terms of abortion and Scotland’s Davena Rankin made a powerful and reasoned speech.

Scottish Electricity’s Elaine Duffy told Conference that UNISON research revealed that LGBT members were disproportionately hit by service cuts. But she had a message of hope: “Chilling as the research findings are, we must use the findings to reject the politics of austerity. We must show young LGBT people – indeed show everyone – how things can be different.”

“There’s a sense of change in the air,” said Elaine. “Let’s build on it and stand together for LGBT equality.”

Save the planet and our pensions
South Lanarkshire in the form of Stephen Smellie won Conference backing for a campaign for the divestment of fossil fuel extraction for our pension funds for the sake of our planet but also warning that fossil fuels pose a risk to our pension fund investments. Glasgow’s Nora Adeyemo also spoke on this one.

Brexit
Delegates backed Northern Ireland’s call to campaign for the devolution settlement to be respected throughout the process of developing and implementing the Great Repeal Bill. Conference backed UNISON Scotland’s amendment for more involvement of the devolved administrations but Katrina Murray’s call on behalf of Lanarkshire Health for each of the devolved administrations to be able to reach their own positions on access to the single market a step too far and it was lost.

Owning our Conference
People who have read these summaries before will not be surprised at my call for Conference to take control of itself. It is something to be participated in, not a spectator event. To participate fully, we need to organise in our regions and between regions on the floor – as well as with the NEC – and sadly that seems to be reducing year on year.

There are a good number of first time Scotland delegates this year. Let’s hope you make links with other delegates old and new and come back next year, enthused and prepared to organise to take control of your Conference.

Coming together
Due to the sad and untimely death of Eric Roberts in his presidential year, Conference was chaired mainly by vice president Carol Sewell who did a great job in such sad circumstances. She was backed up by vice president Margaret McKee and past presidents.

In one of those moments Conference does well and brings delegates together as one, it closed with a photo of Eric Roberts while ‘You’ll never Walk Alone’ was played.